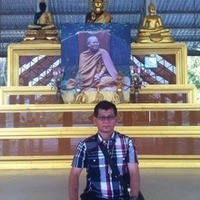 1983 and 1993, respectively. He was a post-doctor research fellowship in

1994 under the European Community research project. He has been

working with Department of Physics, Faculty of Science, King Mongkut’s

Institute of Technology Ladkrabang, Bangkok, Thailand since 1985. He

has been a visiting professor with Department of Physics, Faculty of Science, Universiti

Teknologi Malaysia and Quantum Life Institute, Thailand since 2007 and 2014, respectively.

He has authored/co-authored more than 625 research papers in Google Scholar database, 430

papers in Scopus database, 450 papers in research gate, 45 papers in Pubmed, and 45 chapters

and books. He got more than 100 graduated students in optics and related applications. His

research interests are in multi-physics, nano-science and engineering, nano-communication

America (OSA) and OSA advisory board member. He was a candidate of Eni Awards

one of best seller books titled “Small Scale Optics” published by Taylor and Francis, USA in